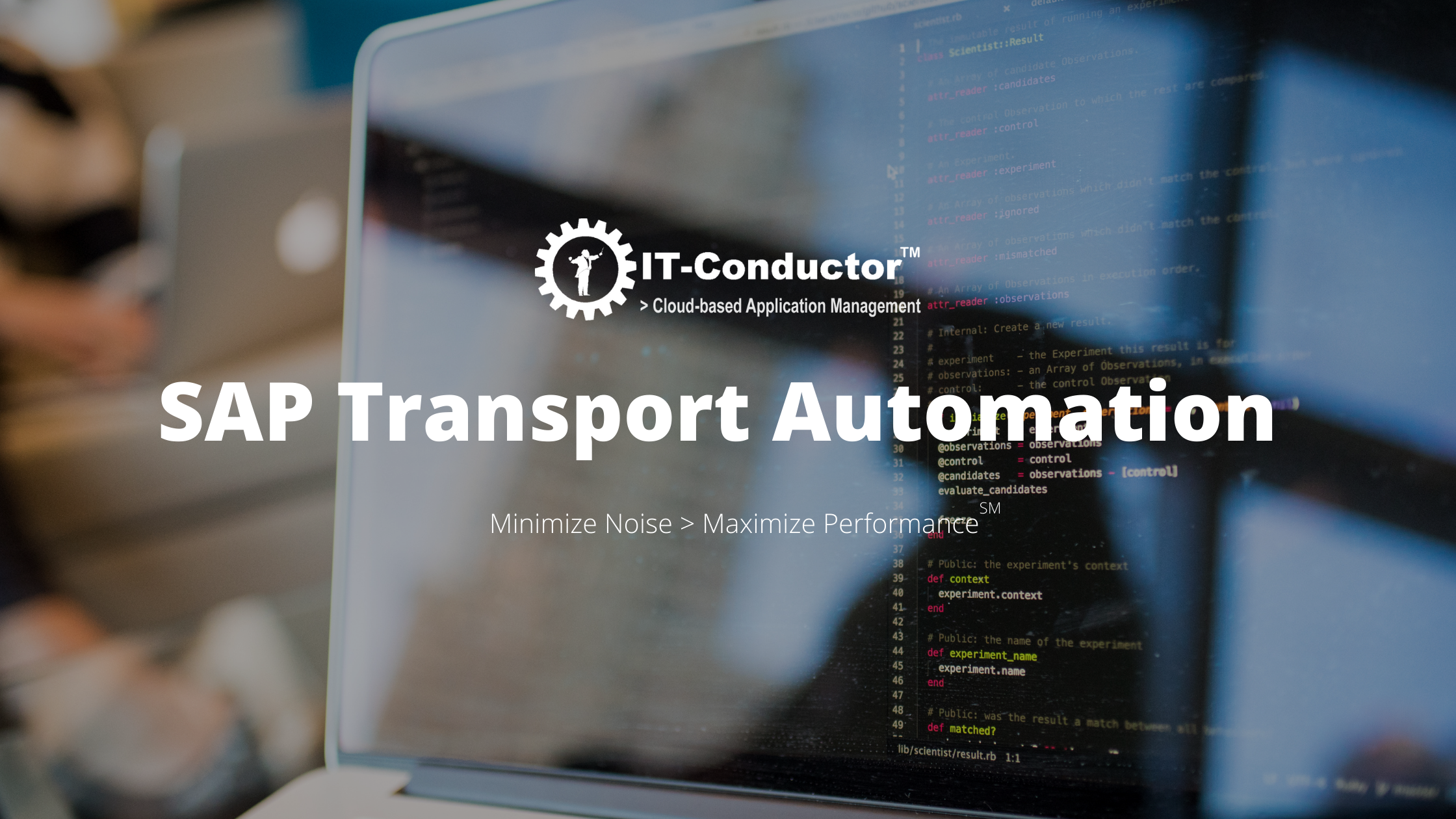 With contributions from Femi Charles and Linh Nguyen

This case study talks about the basics of SAP Transport Management and how ITC SAP Transport Automation can help transform your implementation projects just like what it did for a Fortune 100 medical device company.

To say that managing transport requests is challenging would be an understatement. It involves several possible risks if not managed properly. In large SAP implementation projects that process hundreds or thousands of transport requests, having some misses in production will most likely occur. When that happens, incorrect object versions can, later on, cause a defect in the production environment, not to mention inherent delays and associated costs. This is why it’s important that transport management systems are in place to properly manage, control, and import development objects from one SAP system to another.

In the quarterly feature that we published last year, we have briefly talked about how we simplified the process of moving transport requests in SAP. It was a big leap in our automation efforts as we collaborated with a Fortune 100 medical device company to come up with a solution that removes this pain point of having to manually process transport requests. After a year of using the IT-Conductor SAP Transport Automation, we received tremendous feedback about how they were able to immensely reduce their development and testing efforts in their implementation projects, and how they were able to drastically save time.

"This tool has drastically improved the time it takes to get changes tested by the off-shore team."

"Thanks to IT-Conductor for working with me in architecting and building the SAP Transport Automation solution and supporting it over the year. This self-service/automated process has immensely helped us in reducing the development and testing efforts in our implementation projects."

SBX vs. DEV vs. QAS vs. PROD in SAP Systems

Before we dig deeper into this automation feature in IT-Conductor, let’s quickly discuss the concepts behind the three different environments in SAP systems namely Sandbox, Development, Quality, and Production.

What are Transport Requests?

A transport request is a package that is used to transfer code and configuration changes from one SAP system to another. It is commonly initiated by the developer or the test engineer. Think of it as a container that carries information regarding who initiated the request, the source and target system, the type of change, the purpose of the transport, and most importantly, the configuration changes.

Whenever developers complete their development work, they need a place to test it, either in the same environment where the development was carried out (this is not ideal but in some cases, DEV and QAS are acting as one) or move it to another system like the QAS. Once the development has been tested and the end-users are satisfied, they can move it down to the production system to be used by the end-users.

There are two types of transport requests that we have employed in this automation project –  the customizing transports and the workbench transports.

Customizing transport requests involves changes that only affect a particular client. This means that if you make changes to the client-specific data, the system will prompt you to store and import those changes to the target system.

Workbench transport requests, on the other hand, involve changes that span across clients. This means that if you make changes to a client-independent or cross-client data, the changes will automatically be reflected in all the other clients.

Managing transport requests are executed manually where the developer initiates transport requests, performs adjustments in queues, runs the export task, and the SAP Basis team (or Transport administrator) schedules it in the queue for later import when approved. On top of those activities, approvals are also in place as a way to govern the change management procedure. All those activities plus the fact that administrators and stakeholders also need to be notified once the transport requests have been imported successfully, or if they failed and need remediation prior to a re-transport. Overall, it takes so much time, effort, and lost time due to a lack of workflow automation.

This is what sparked the conversation with the medical device company about the automation of transports.

Conceptualization: Automation of Transports to QA and Sandbox Systems

It all started with an inquiry to check if it was feasible to automate the transport process to QA and sandbox systems. Given the scenario that they don’t want anything released from the DEV systems to be directly imported to the QA and sandbox systems, they wanted to give the developers the option to initiate transport requests via e-mail. With the capability of the IT-Conductor to read e-mails, developing a parsing algorithm to read information from e-mails is possible.

With IT-Conductor’s capability to orchestrate complex IT operations, we were able to design and develop an automated solution to manage transport requests. Having the different SAP systems of this medical device company already monitored by IT-Conductor, developing an end-to-end workflow was less intricate than implementing a solution that is yet to be integrated with their existing systems.

We have already worked on different automation solutions using IT-Conductor, and SAP Transport Automation is one of them. To quickly understand how it works on a high level, we have divided the following sections into three parts – the implementation of SAP Change Request webform, the Process Change Request Processing Composer, and the Dashboard that shows the status of the transport requests.

The process starts with the developer initiating a transport request using the SAP Change Request webform. This is where all the required information is captured. 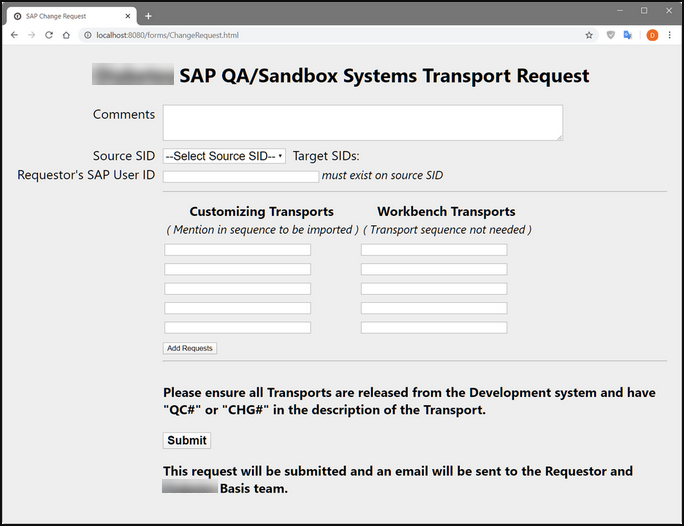 In the form above, you can see that the developer or the requestor can select the Source SID, define the Target SIDs, and indicate the requestor’s SAP User ID. Take note that the capture takes place on the gateway. Once the requestor submits the transport request, it will send a request to IT-Conductor to create objects to capture the transport request(s) submitted. It is also important to note that upon submission of the form, the requestor’s SAP User ID will be used to pull the user’s e-mail address through an RFC call and will be stored in SAP.

In the process defined below, you can see that the user details collected upon the submission of the form will trigger an e-mail with the transport request information to be sent to the requestor and other stakeholders (e.g. SAP Basis Distribution List). This is to ensure that all the concerned parties are aware of the request(s) for changes in the system.

After the transports are imported, IT-Conductor will send an e-mail notification with the transport import status to the requestor and other stakeholders defined in the process definition.

All submitted transport requests will show up in the dashboard, allowing the SAP Basis teams to monitor the statuses of the requests submitted by the developers.

Why You Should Automate Transport Requests

Transport requests are crucial especially when moving changes from DEV to QAS or from DEV/QAS to PROD. Given the complexities involved from the moment the transport is released to importing the changes to the target system, having an automated solution will definitely:

Since transport requests may be submitted in bulk using this automation feature in IT-Conductor, combining requests into a single sequence and importing them will save you a great amount of processing time.

Without automation, processing transport requests involve having to define the configurations for the domain controller, determining the transport route, having to log in to the systems to manually execute commands, and so on. Having an automated solution in place will help your organization reduce manual processing.

Ultimately, the risk of importing incorrect object versions in production will be greatly reduced since manual processing will be eliminated and all behind-the-scenes processing and verification will be handled by the solution.

The sequence to which transport requests are processed is also crucial when moving a request from DEV to QAS or DEV/QAS to PROD. With how IT-Conductor is designed to oversee and relate all components in your environment, the transports will seamlessly find their way from whichever source system you define in the request to the target systems, all ensuring that their respective sequences correspond to the objects created upon submission. Imagine having to manually manage several development projects in your environment, even with a change management process in place, you will never fully control what goes to production with your knowledge.

Most large and/or public companies need change audits in their environment to ensure compliance related to specific industry regulations. IT-Conductor fully logs and reports on the end-to-end process of transporting changes throughout the SAP landscapes, providing audit trails related to what, when, where, who and how transports are managed.

Start the conversation within your organization now.

If you want to learn more, feel free to schedule a demo with us and our team will get in touch with you.

Cloud Migration: Benefits and Its Challenges

Accelerate Your Cloud Transformation Efforts This 2022