It's cool if you can perform SAP monitoring and SAP HANA monitoring without installing an army of agents, but that's not enough, we want to enhance SAP Basis Automation using Cross-platform automation capabilities.  Whether you want to automate system copy post-processing with our SID-Refresh tool, or manage backups, it's easy once you are monitoring SAP with IT-Conductor.  The IT operations automation possibilities for the Basis team are limitless once customers realize up to 90% savings in time and cost over traditional SAP monitoring solutions.

In this article, we'll demonstrate HANA backup integration as well as the cleanup of old backups.  These same principles and processes can be applied to other databases such as Oracle, SAP ASE, etc. 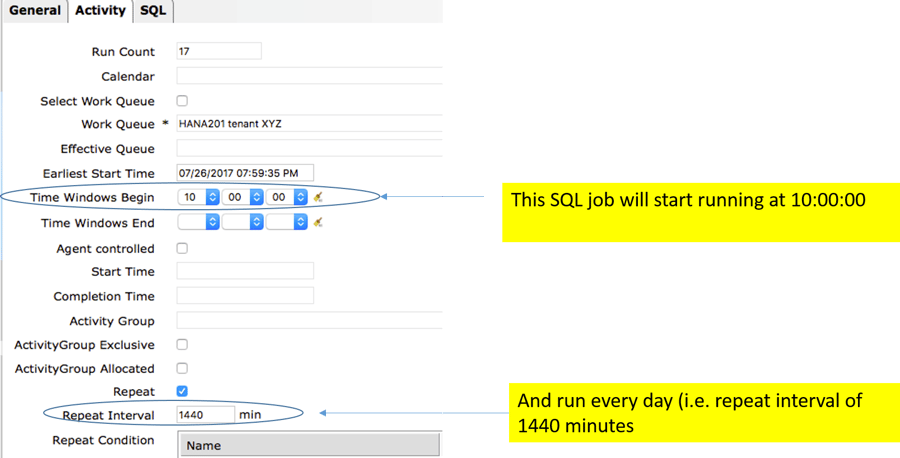 Since a backup can run varying amounts of time depending on the size and capacity of the system, we recommend performing a backup in 'ASYNCHRONOUS' mode.  Thus the Email notification simply notifies that the backup has been submitted, and the remainder of the query continued.  The backup status would need to be checked separately later via a SQL report on the backup catalog.  In the example used here, we provide the information about the last few successful back-ups to show historical backup time/duration and size so you can estimate how long the current backup will run.  IT-Conductor can string together multiple activities into a single process, which can check on the status of the predecessor activity.  This was demonstrated in a prior blog post listed in the introduction. 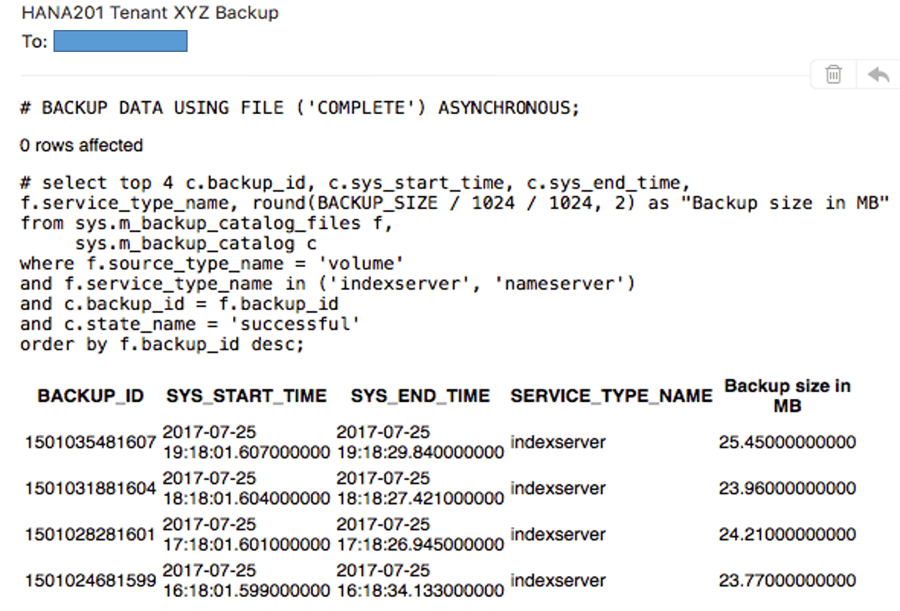 Maintaining a clean backup repository/catalog as well as the backup space is just common sense best practice for housekeeping.  This is easier said than done and many customers ignore managing this task until they get notices of issues like backup space, failed backups, or just slow backup due to large catalog and target backup directory.

The following SQL deletes backups from the backup catalog and from the file system.

To simplify and automate the process, a simple script was developed/used to:

For each tenant database,

In this example, the system has three databases:

A backup clean-up script is created for each DB, with the naming format ‘backup_cleanup_<dbname>.csh. Basically, it contains some validation and two general steps:

The generated SQL statement in XYZ_ID will contain the following:

Execute the cleanup/deletion with the following:

Crontab for the Clean-up Tasks

Schedule the clean-up job using crontab.  For a better solution, we can use the IT-Conductor SSH job feature of OS monitoring to incorporate shell script automation.

Figure 9: Crontab for the Clean-up Tasks

Of course, you can always pay for 3rd party SAP-certified backup solutions that integrate with databases like SAP HANA, such as Commvault, EMC, Veritas (Symantec), etc.  IT-Conductor can integrate with such systems via API if required, but keeping things simple by integrating built-in SAP HANA backup capabilities with a central monitoring and automation platform helps streamline IT operations.

Since IT-Conductor is a cloud-based service, you too can start automating many tasks (FREE for the first 2 SAP Systems connected, remember there is no complex software installation needed, so just subscribe and give it a try).  We would love your feedback also of tasks that you'd like to see automated, yes we'd love the challenge, so SAP Basis, Let's Automate IT!

If you think our Automation is cool, try our cloud-based SAP Monitoring, FREE for the first 2 SAP SIDs.